The following is a new companion story to the book Camp Follower One Army Brat’s Story by Michele Sabad. To be published Fall 2019 in a new anthology “My Hero Dog: Stories on How Our Dogs Have Helped Shape Who We Are” by the Museum of the American Military Family.

The phone rang one weekday evening when I was 24 years old, living in Kingston, Ontario. This was in 1982; I was married to my Air Force husband and going to college. The call was not a regular Sunday-after 6pm-call, when long-distance rates were in effect, so when I heard my mother’s voice on the line from British Columbia, I instantly thought something wrong. It was.

Cognac, my family’s dog since 1969, acquired as a roly-poly puppy at the northern air base of Goose Bay, Labrador, had arrived on the spring morning of my 11th birthday party sleepover. A golden-red coloured Lab look-a-like, but smaller, and fatter. He looked like a little beer bottle, the old stubby kind, with legs. White-tipped paws that scampered after us four kids, truly another little brother in the family. He would come with us on the rest of my dad’s military postings: from Labrador by airplane and by car at my mother’s feet across the country to Saskatchewan; back east again to Petawawa, Ontario, where I would be the first one to leave home. Another long trip west to Chilliwack, British Columbia, to end his years there.

As a pup in Labrador, Cognac was, like the rest of us, allowed wide open freedom. He’d bark to be let out – one short yelp – and bark to be let back in. We had a chain outside, but it was rarely used. Besides, his bull neck allowed many escapes from the collar. We had a harness at first for him, but he chewed it to pieces, so choke-chain collar it would be from then on. He became a self-appointed guard dog, no matter that he never grew higher than our knees. The mongrel-terrier temperament that belied the adorable brown eyes and silky floppy ears, had asserted itself.

He really was the top dog to us kids. A favourite game was to chase and herd us squealing with delight onto someone’s bed – his stocky legs never got long enough to jump up himself. Duty done, he would click his toenails proudly down the hardwood hallway from the bedrooms, looking for our mother, to maybe get a treat for his corralling job. He always deferred to Mom, his only leader. As for his bark, when on the job, it could be terrifying, but I never knew him to bite anyone. Not even boyfriends in later years. Those would be enthusiastically harassed and chased away until acceptance was granted, but only after multiple attempts. Once a pack member, however, one could give homage via treats – he was ever the “gobble-guts”. He enjoyed head and back scratches; cuddling, petting, and nose kisses were also permitted.

Fiendishly smart and capable of many tricks, Cognac was nevertheless loathe to perform, except, of course, for treats. He ate anything. In Saskatchewan, where “spits” (sunflower seeds), were consumed by the pound, he could crack and spit out the shells as skillfully as anyone. I once saw him eat leftover stew and pop out the peas, whole. His weakness, though, was garbage. After Labrador, he had to be tied up on our postings, but we still let him out at night to prowl. He prowled for garbage, based on the throwing-up he’d do on his return. Especially if my dad answered the door to let him in – the sight of my dad seemed to make him want to share: “Wow, look what I found and ate tonight!” Often he rolled in it, too. The garbage, not the puke.

Of course Cognac had all his shots, but I don’t remember much veterinary care. (Then again, I don’t remember much specialized health care for us kids in those days, either.) But there was an instance where he needed some treatment. He’d come limping home unusually subdued, and would only let my mother look. His poor little scrotum had been ripped open. The neighbour’s story was that their pet rabbit had delivered a slice with hind-leg claws that caught him in this unfortunate spot. My parents were actually pleased that he had to be neutered, as the hope was it would calm down his territorial habits. Alas, there was no noticeable change in his dominant roaming behaviour at all. The small radar base in Yorkton, Saskatchewan belonged to him – the bartender at the mess said he visited nightly, expecting and receiving his treat. Like a mobster, collecting his payola.

More escapes and chases and even “arrests” by the military police (where we’d have to bail him out from the pound) would follow in the years after Yorkton, on the bigger army base of Petawawa. It was in Petawawa that I myself would marry and leave home, and on return visits, Cognac would always snub me at first, as if to remind me that he hadn’t given permission for my departure. He’d come around for his belly rub soon enough, but he did not like to see suitcases.

A final cross-country trip to British Columbia, where my mother would tell me his domain was shrinking with age and arthritis. She still let him out at night, but after a beating by a younger dog down the street, she said he restricted patrols to their own yard, peeing in every corner. She said it was fascinating to finally see his whole nightly routine. And in fact, after one such night, he’d yipped to be let in, and sat at my mother’s feet for his doggie treat – a more healthy tidbit than those of his youthful garbage-eating days – and after gobbling it down, he’d looked up at her and tilted his adorable little head, all the golden hairs now bleached with age, then fell over on his round old belly, and lay there, dead. Probably a doggie stroke.

My parents buried Cognac under the rose bushes in their garden at that house in Chilliwack that they’d bought and would sell after my dad left the army. (I wonder if the new owners ever knew? I hope they kept the rose bushes and didn’t dig them up!)

As for Cognac, he lives in our family memories. He taught me many lessons – ones that I appreciate even more as I myself age. Live every day to the fullest: eat garbage while you can. Roam. Explore. Command your world! But learn your limits – there will always be bigger and younger dogs. And in the end, die contentedly after a fun night out and a treat. 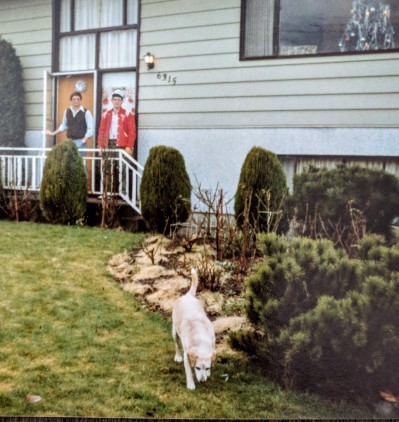 Last patrols around the rose bushes 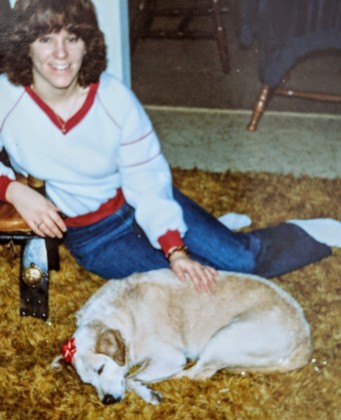 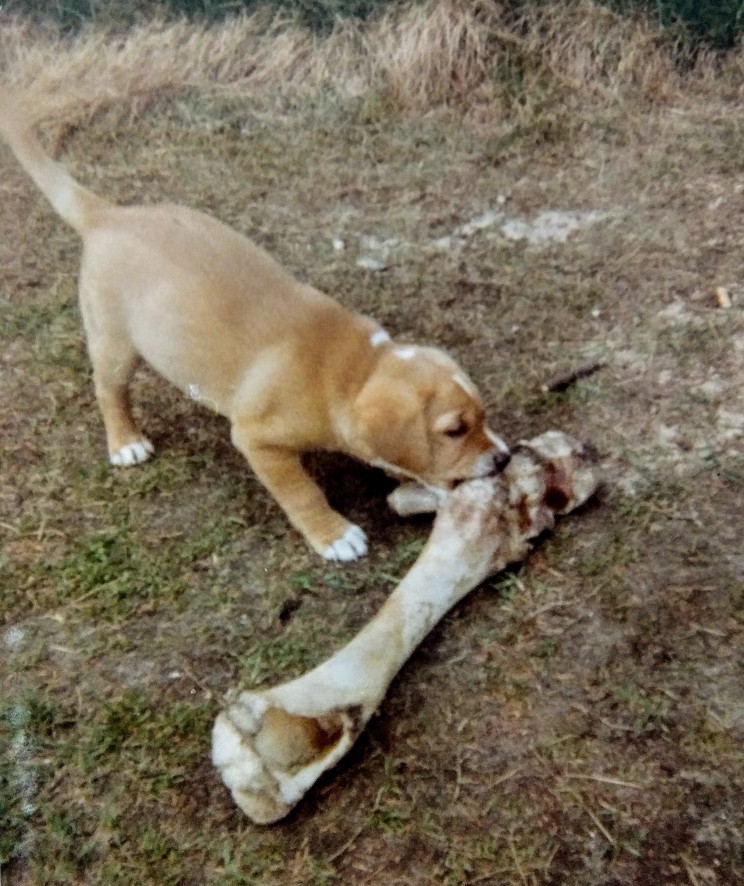 7 thoughts on “Cognac. Yes, Named for the Booze.”